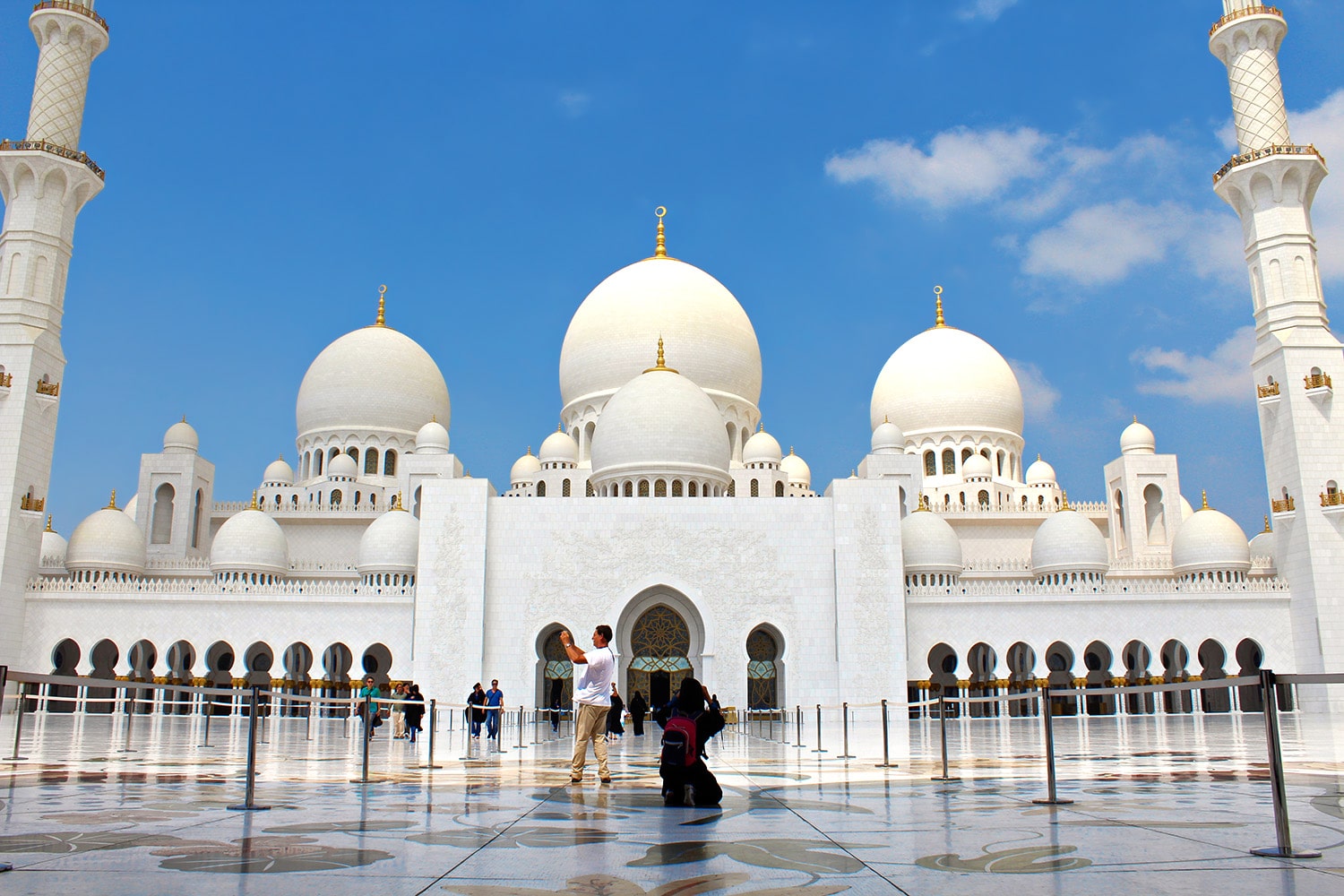 When was the Sheikh Zayed Mosque built?

The Sheikh Zayed Mosque was built between 1997 and 2006. The ambitious project was initiated by the late president of the United Arab Emirates Sheikh Zayed bin Sultan Al Nahyan, who unfortunately died in 2004.

Why was the Sheikh Zayed Grand Mosque built?

Sheikh Zayed idea was to unite all the social layers of the Islamic world inside a Mosque that would be considered a work of art and modernism at the same time. Sheikh Zayed imagined a place of worship that would help people come together, and understand Islam as a religion with messages of peace, tolerance, and diversity. This diversity is reflected by many design choices, as the architects managed to bring together materials and suppliers from nearly every corner of the globe.

How to visit the Sheikh Zayed Mosque?

The Sheikh Zayed Mosque is open to visitors every day (9 am-10 pm) except Friday morning, a time slot dedicated to the faithful. Respectful non-Muslim visitors are allowed to visit the mosque, and modest clothes are required. There are abayas available for free in the mosque just in case you haven’t come prepared with your own. Entry is free.

The mosque has a total of 82 large round domes with 7 different sizes, all inspired by the Badshahi Mosque of Lahore, Pakistan, and for their construction were used marbles from Aquabiana and Biano (Italy), Prilep (Macedonia), Makrana (India).

The beautiful mosaics were made with blue lapis lazuli red agate, transparent violet of amethyst, iridescent blues, greens and purples of abalone shell, and creamy white pearl. The gorgeous floral pattern is repeated on the qibla wall, but with colour modulation, in order to avoid distracting worshippers during prayers.

The shining chandelier below the entrance dome is one of the seven golden chandeliers that were made in Germany and that include Italian glasswork and Austrian Swarovski crystals.

The luxurious carpet with its specially designed patterns took the women of Khorasan in Iran 2 years to weave from New Zealand wool. The specialist carpet makers were flown to Abu Dhabi to join it all together as the largest carpet in the world (5,700 square meters).

In the main courtyard of the mosque, a sparkling white space of reflection pools and pillars provides enough space for 30,000 people. This area was inspired by Pakistan Badshahi Mosque and the Mosque Hassan II in Morocco and decorated with white marble and mosaics from Greece. 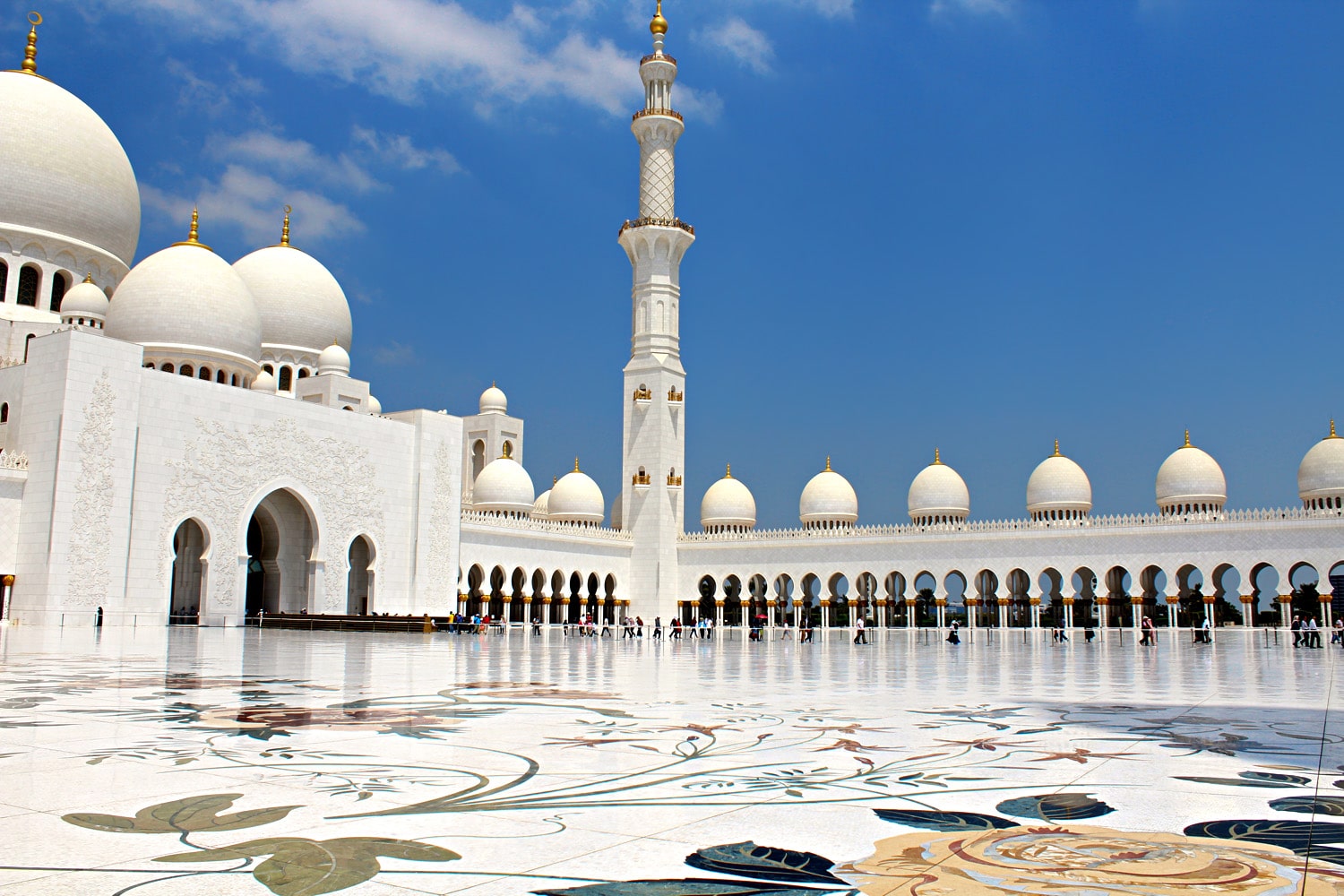 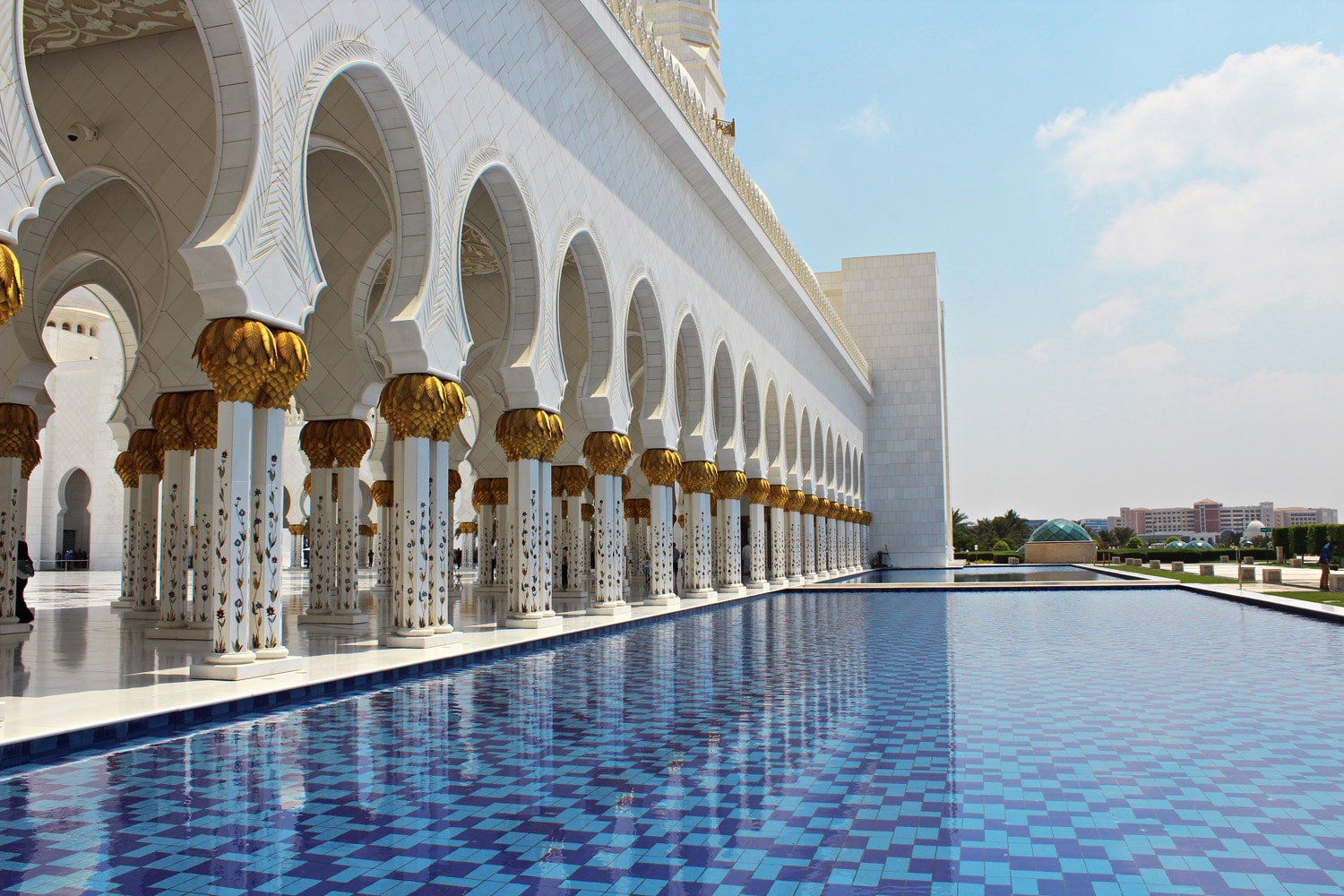 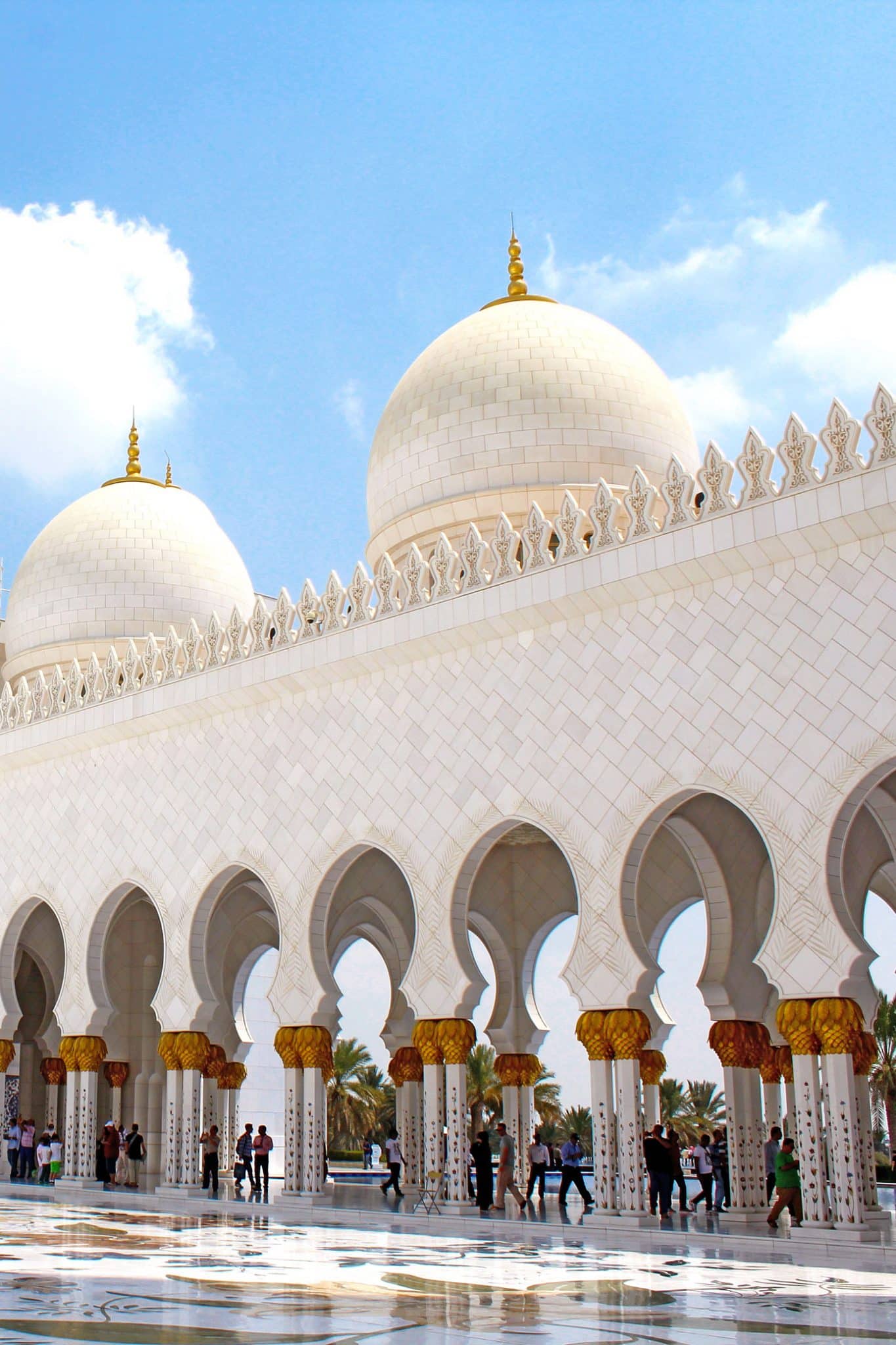 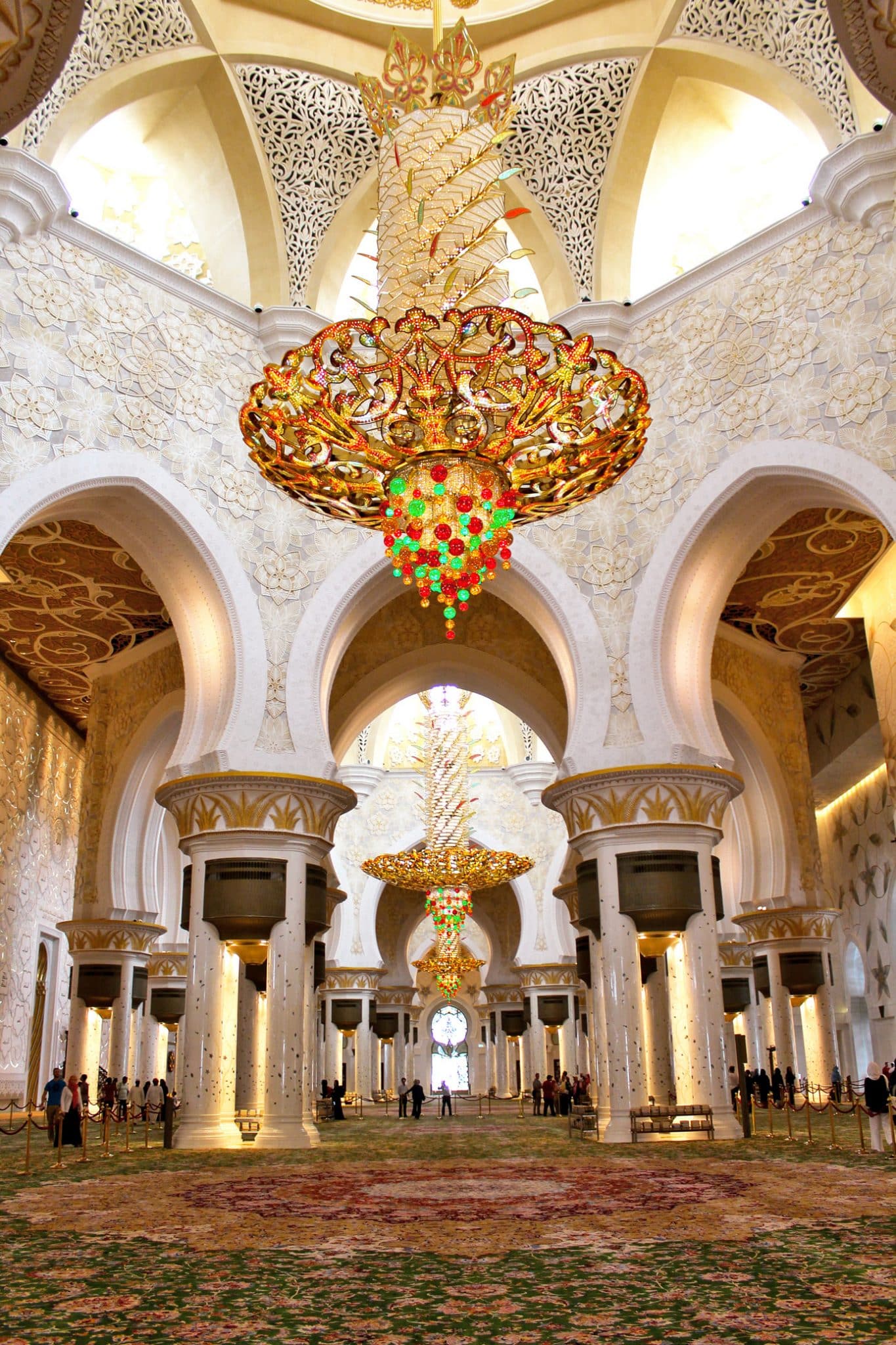 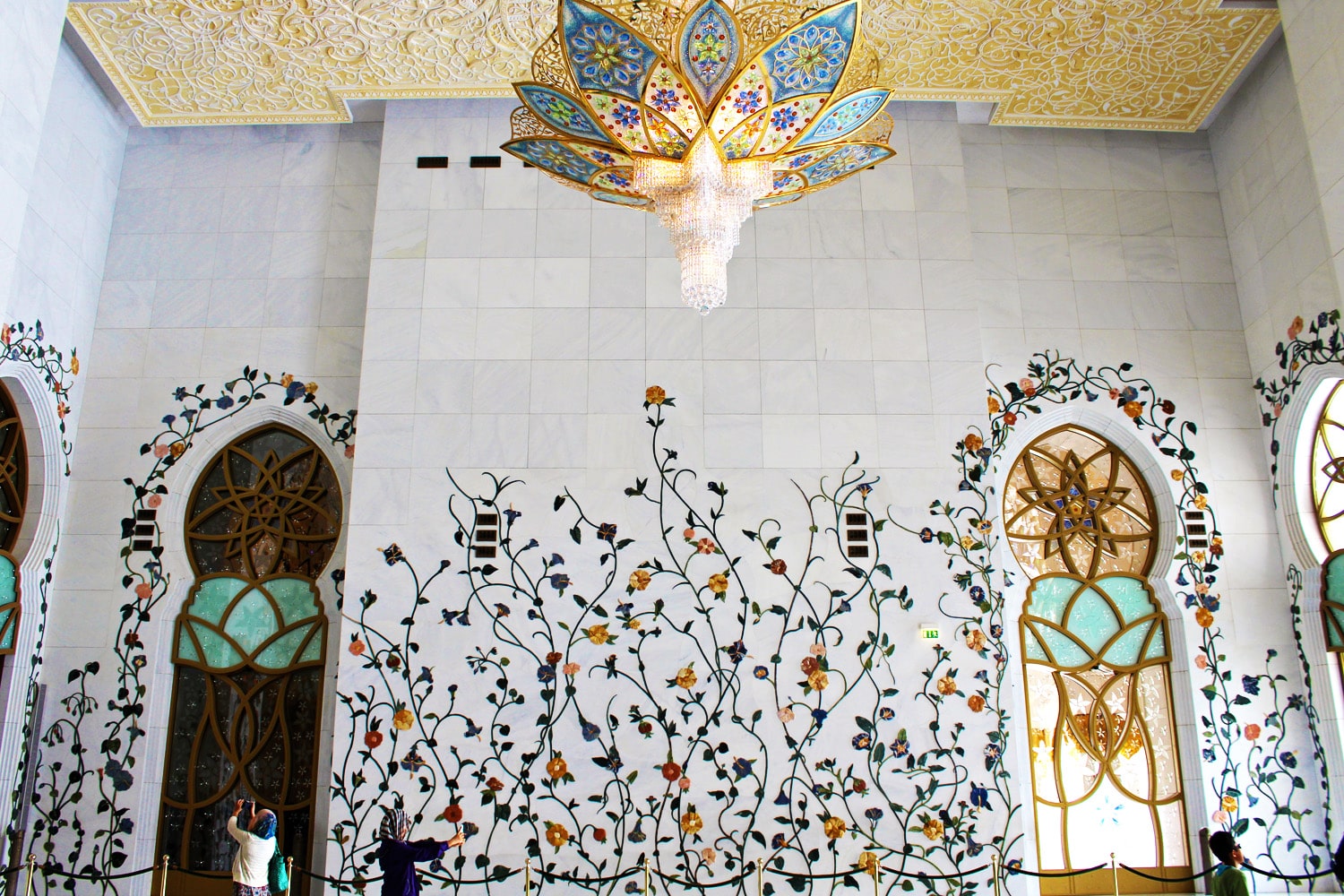 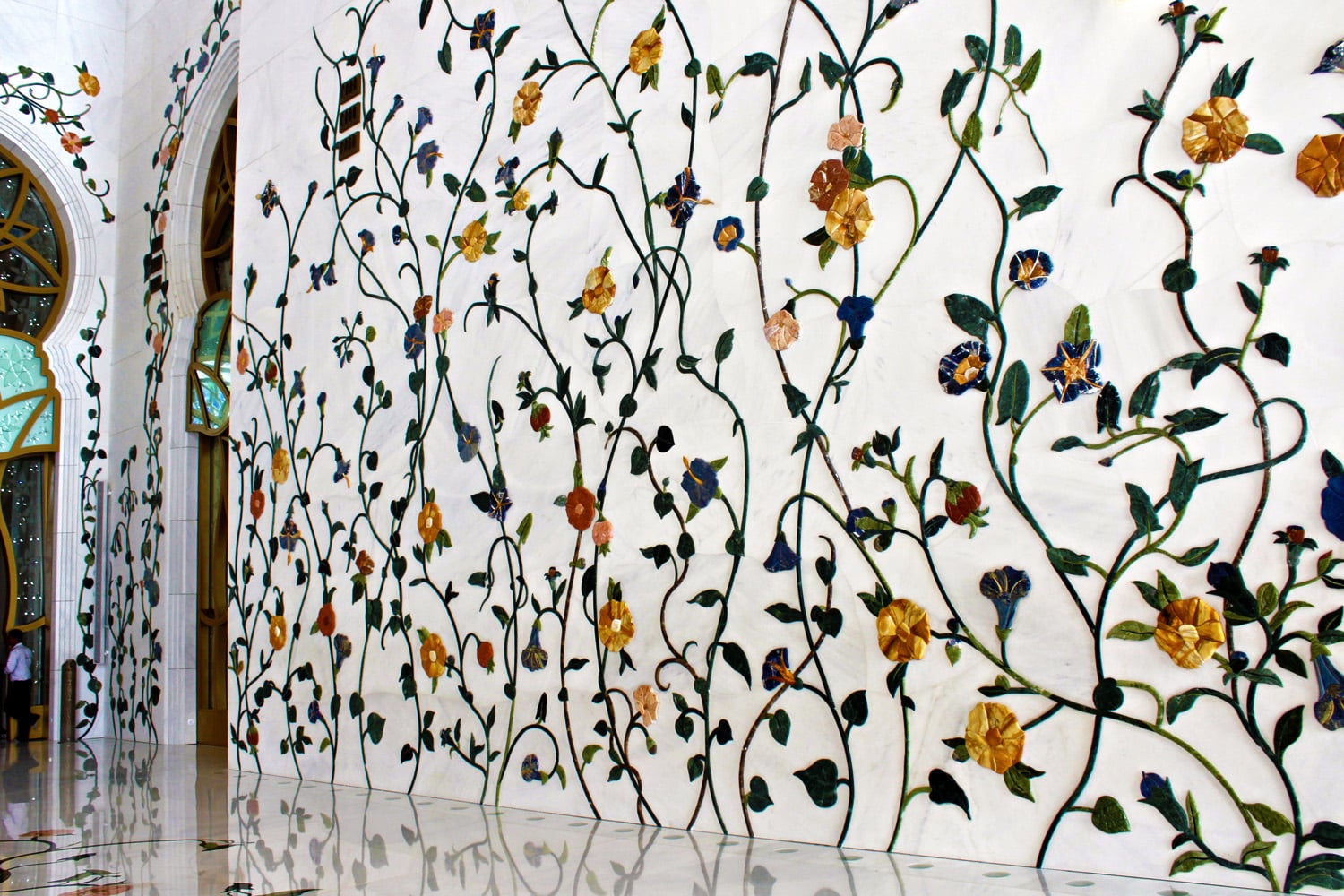 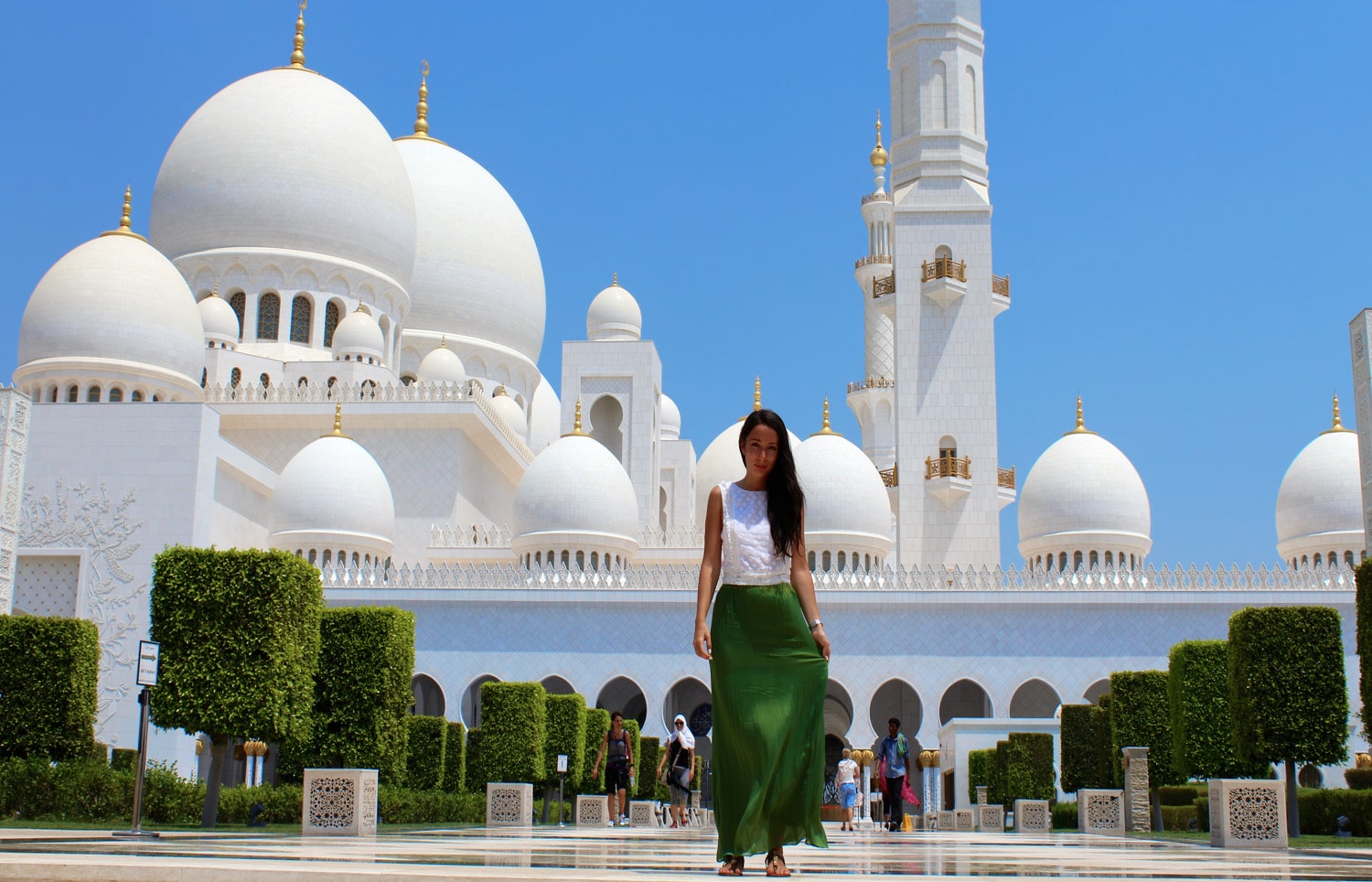